By Admin on 23rd December 2020 in Uncategorised 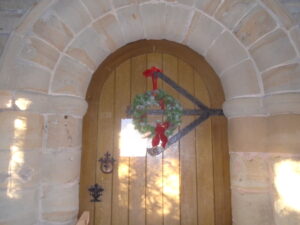 The door of Billingsley Church is currently decorated by a wreath. The wreath is a common Christmas decoration. The Wikipedia take on wreaths is that they originated in the ancient world, with connections to mythology and also as something that could be placed on the head of a victor, either in a sports competition such as the Olympic Games or a soldier after a battle. They were adopted by the Christian Church, although Wikipedia seems to think that the association with Advent and Christmas did not happen until the 16th century. The wreath is made of evergreens, representing everlasting life (or at least, the hope of life in the darkness of winter); the circle of the wreath was used to symbolise the eternity of God. The wreath is also used a base for candles, with one lit for each of the four Sundays of Advent. Although I can’t find much on the internet, I wonder if there is also a connection between a holly wreath and the crown of thorns pushed onto Jesus’s head at the crucifixion?

I’m sure all this is true, but I have to say none of this was what I thought when I saw the wreath on the church door. Instead, I was struck by its simple beauty; a flash of rich green against the light oak of the door. And also the way it seemed to invite me to open the door, to see what was inside the church. It was as though it was calling me in, calling me to hope. Perhaps that is not such a bad message in this of all Christmases, when we celebrate God coming into our world, to invite us to join him in his world.