By Admin on 9th November 2020 in Uncategorised 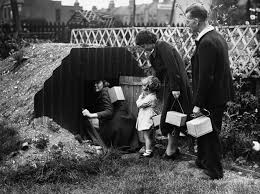 The People’s War, the people’s love.

The Second World War is sometimes called “The People’s War”. Not only was in fought by an army rapidly formed from the civilian population, with the advent of aviation, everyone in the country was potentially a target. People in Bridgnorth died as a result of German bombs; the orange sky at night to the east provided a grim reminder of far heavier bombing of Birmingham and the West Midlands. At the acts of Remembrance we normally commemorate those of fell in the Armed Services and of course, they did bear the brunt of the conflict. But it was a conflict that was experienced by almost every person in the country, and prayers we use normally acknowledge this.

Now, seventy five years after the war has ended, it is rapidly passing from living memory, but it has made an impression on our nation that will endure much longer; I think of the popularity of 1940s events on the Severn Valley Railway and other heritage attractions. These can give a sanitised version of the event, in which the pain and brutality of conflict is removed, but they do also remind us of a time in which the country seemed largely united in a common purpose, in a struggle that was just. The 1940s events bring people together to enjoy themselves and perhaps there is also a nod to the togetherness of the war years.

Christianity has much to say about how we should lead our lives; Jesus called on his followers to love each other and an early church leader wrote “See, how Christians love each other!”. Of course, there are many times when the church falls short of that, but at its best, its members try to stay faithful to Jesus’s commandment and there have been times when that mutual love has also been apparent in the life of our nation. We can give thanks to the Second World War generation for their example and find inspiration for ourselves as we move back into a second lockdown.