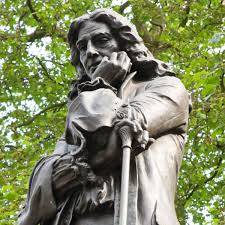 Suddenly, past lives matters. Memorials have become political; our news is dominated by the statue of Edward Colston of Bristol, a man who until recently was only of local interest and who died almost 300 years ago. His entry on Wikipedia sums up his life and the issues it raises: he was an “English merchant, philanthropist, and Tory Member of Parliament who became involved in the Atlantic slave trade”. Which of these do we wish to remember? When his statue was put up in Bristol 125 years ago, he was remembered as a philanthropist; the crowd who pulled his statue down last Sunday saw him as a slave trader. He was of course both.

It is not for me to comment on the rights or wrongs in this case. But I am interested in the way we remember other people, those long dead but also sometimes those very much alive. There is a danger that we see individuals too simplistically, as either heroes or villains, judged entirely by our own values or those currently fashionable. The church, with its long and still-growing list of saints can be as guilty of this as any organisation. But if we turn to the Bible, we often find warts-and-all presentations of the great heroes of both the Old and New Testaments. King David is held up as the founding King of Israel; we are told that God promised David that his descendants would rule for ever and Jesus was called “son of David” by the crowd in recognition of this; his ancestry was traced back to the king. And yet the historians who recorded David’s life told how he betrayed one of his most loyal generals, Uriah. He slept with Bathsheba, Uriah’s wife and when he got her pregnant, he arranged for Uriah to be killed. Those who acclaimed Jesus as “son of David” were well aware that David himself was a flawed human; sometimes loyal and brave, sometimes not. That is what it means to be human, to struggle with and sometimes give into what the Bible calls sin. This doesn’t mean that we should not admire some individuals more than others, but if we see all their lives in the round, it may help us be more honest about ourselves and our own values.