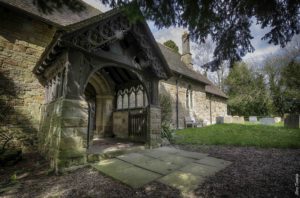 Billingsley is a parish about six miles south of Bridgnorth, in the Diocese of Hereford. The church was built around 1140, and is Grade II * listed.

The church was originally a chapel subject to Morville church. It was founded by Herbert de Castello, Lord of Castle Holdgate, who also endowed it with 12 acres of land and a mansion.

The original Norman doorway can still be seen in the south wall of the nave. This was blocked off sometime during the 14th Century, and a new door was built along with a timber-framed porch, which is one of the finest mediaeval porches in the county. Around this time, the font was also erected and the north bell was cast and installed. 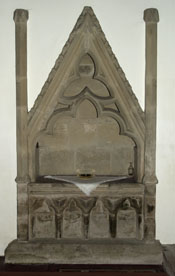 In the north wall of the chancel is a fine, 14th Century Easter Sepulchre built to house the consecrated host between Maundy Thursday and Easter Day.

The unusual double pulpit is Jacobean, dating from around 1620 and is thought to have been made by local craftsmen.

A notable resident was the first Englishman ever to learn Chinese, Dr. Thomas Hyde, who was born here on 29th June 1636. He was Professor of Arabic and Hebrew at Oxford University, and Head of the Bodleian Library. He also contributed towards “Walton’s Polyglot”, a version of the Bible in nine Eastern languages. His father, Ralph Hyde M.A., was Rector of Billinsgley church from 1623-1632.

In 1707, during the reign of Queen Anne, Abraham Rudhall of Gloucester cast and installed the south bell, which is inscribed “God Save the Queen AR 1707”.

On the north wall of the nave there is a marble tablet in memory of Lieut. Harold Gibbs RHA, who fell at the Battle of Arras in 1918. He is the only person from Billingsley known to have died in the Great War. 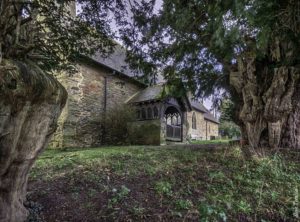 Outside the church are two ancient Yew Trees – one female, and one male.

Both trees have a girth of over 20 feet, which means that they are ancient yews, and are centuries old.

Both trees are listed on the National Register of Ancient Yews, and are mentioned in Andrew Morton’s “Trees of Shropshire”.

For more historical information about Billingsley Church please click on the below links: 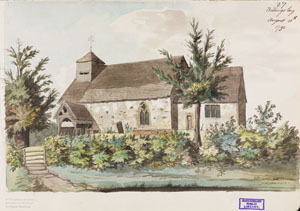 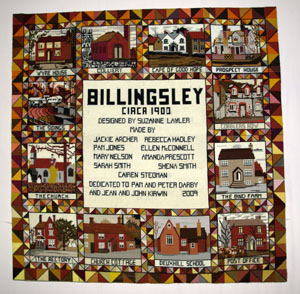 Over the succeeding centuries, the patronage of the Church and the ownership of the village changed hands on several occasions, but its inhabitants led a rural life with a fairly constant population of about 120. In 1793, the outbreak of the Napoleonic Wars led to increased demand for industrial products, which promoted the opening of a colliery about a mile to the south of the church in 1796. This in turn led to the building of a coke fired blast furnace on the opposite side of the road and a brickyard on the corner of the road to Stottesdon. There was a large influx of miners from the north of England, and the Inn – The Cape of Good Hope opened in 1800. This influx of miners and their families helped to swell the population to well over 400 by 1811.

More plentiful coal supplies elsewhere caused the industry to move from Shropshire to the Black Country, and by 1870 the population had returned to 120. The mine finally closed in 1922 and the population today is about 180.

Billingsley has once again reverted to being a rural farming community, and is also a very popular commuters’ village serving the West Midlands.