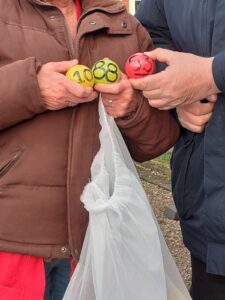 Today the 6th draw of Billingsley’s 100 Club took place. Number 10 won £61 with numbers 88 and 53 both winning £30.50. Since the first draw last September 16 people have won a total of £1,124. Two numbers have been draw twice and on several occasions new members have won on their first draw entry. There are still numbers available for anyone wishing to join. All details are on the 100 Club page.

Many thanks to Bonnie and Mike who  made the draw.