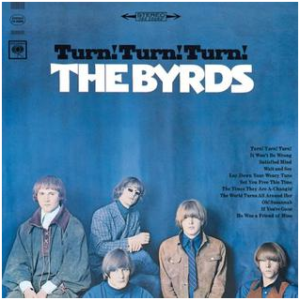 We have just had a service to celebrate some of the music of the 1960s which can point us to God. I’ve had great fun, looking at black and white video clips and reliving music I first heard as a child (born 1961, so 9 when the 60s ended!). One song I kept playing was “Turn, turn, turn”, “written” by Pete Seager in the late 1950s and made popular by The Byrds who released a version of it in 1965; https://www.youtube.com/watch?v=bCcFyR0MITQ

I say “written” because the song is almost all taken from the book of Ecclesiastes, chapter 3; “There is a time for everything and a season for everything under heaven”. Seager invented the title and contributed the last line. Ecclesiastes consists of a series of meditations by a writer traditionally known as “the teacher”. He observes the world and ponders why it seems so arbitrary; the Godly and ungodly both ultimately die and their works pass away. In the final chapter, the teacher concludes with what can seem like a cry of despair: “Meaningless, meaningless… everything is meaningless”. But the book needs to be seen in context of attempts by religious leaders to make sense of Israel’s history; a depressing story of failure and foreign occupation. Time and time again, the thinkers concluded that the failure was due to a failure on the part of themselves; if only they tried to reform their religion, God would restore them. The writer of Ecclesiastes would not have this; whatever God was doing, he could not be won over by ever more heroic acts of worship and obedience. His message was that we had to live our lives in a muddled, fallen world where good and bad both happened and to follow God despite that. I think he would have understood Jesus as God coming alongside us in this world.

As part of living in a muddled, fallen world, it becomes hard to make clear decisions. This is perhaps the message of the lines in Chapter 3 that Seager took for his song. Some of the lines are disturbing; “a time to kill and a time to heal…., a time to love and a time to hate, a time for war and a time for peace”. To that last phrase, Seager added the words “I swear it’s not too late”, which in 1960s USA with the Vietnam war in full flow, touched a cord with many. And yet I think the teacher recognised a grim truth about a muddled, fallen world. On August 15th, we mark the 75th anniversary of the ending of the 2nd World War, with the surrender of Japan. Victory came at a terrible price; not only Allied lives lost but two atom bombs. But I, for one, wish to give thanks for the allied victory over Nazi Germany and Imperial Japan, for the courage of those who fought for right. The teacher reminds us that the generation of the 1940s were right to choose war over unjust peace.