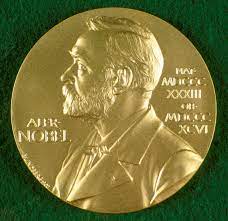 This time of year is always of interest to me, as it marks the announcement of the Nobel Prizes. Yet again, inexplicably, I’ve not had the phone call from Stockholm… But I take some reflected glory from, over the years, having met/known prize winners and on one occasion, actually publishing with one. I’ve also met a number of people who fall into the category of “why-have-they-not-been-given -Nobel-prizes”; the judgement of the committee is always subjective and I suspect had one person been able to give better lectures, he would have had a prize.

This fleeting acquaintance with scientific greats has made some mark on me. It has shown me what a really great intellect looks like; an important lesson in humility for myself and a useful guide for identifying those who think they have a first-rate mind but actually don’t. The people I have met also have another characteristic. Not all scientists are noted for their modesty; sometimes you have to take this side of their personality alongside the merits of their work. However, the Nobel laureates (and the near-misses) that I have known do not have this edge. Perhaps I have been fortunate, but they have all been modest and thoughtful individuals. Whilst I do not think any would consider themselves remotely “religious”, they may have grasped that compared to the wonders of the natural world, or what I would loosely term “creation”, personal humility is the only appropriate response.