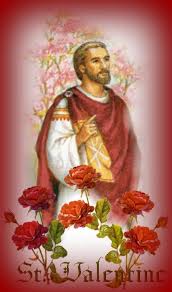 This Sunday is February 14th and we all know what that means… Valentine might be the only Christian saint most people could name in this secular age; certainly the only one whose festival they celebrate, albeit without any reference to Valentine himself. The Valentine who we celebrate on the 14th February was probably a  Christian priest who was martyred in Rome in the 3rd Century. He is said to have restored the sight of the daughter of the judge who initially was charged with investigating him. He was released but rearrested and eventually beheaded. One version of his story is that just before his execution, he sent a letter to the daughter whose sight he restored; this seems to be the origin of his association with romantic love.

Whatever the truth of the tradition, Valentine’s Day is now a celebration of romance and the physical love between a couple. The church has sometimes seemed rather embarrassed by physical love; the passion and joy that this involves. It has overtones of uncontrolled emotion and indeed, it can pass into lust and a desire for self-satisfaction that can be destructive. But it can equally be something higher; a mutual joy between individuals who can imagine nothing better than to be united as they love each other. This is what we celebrate in Christian marriage, it is what we might hope that all couples enjoy and is also can be a useful way of thinking about the love of God for ourselves. So celebrate the day and remember Valentine, whose passionate love affair with God was stronger than life itself.