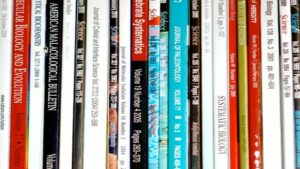 As a scientist, I am ultimately judged by the work I produce. The way that is done in science is by publishing results in papers in specialist journals; these describe the work and its significance. But beyond that lies much politics. Most projects involve a number of people; how many of these have contributed enough to be included as authors? Then there is the order of authors; first author usually did most of the experiments, the final author usually planned it; 2nd or 3rd from first or last isn’t too bad; not good if you are the middle where  most end up. The person in charge of the paper sometimes needs considerable tact and diplomacy in order to draw up the author list. Equally, an important lesson for a young scientist to learn is a true estimation of their own value in a project. False modesty and inappropriate self-importance are equally wrong; the former as it simply encourages the latter individuals in their own delusions.

Jesus never had to sort out the author list on an academic paper, but he did have to deal with egos of his followers, some of whom seem to have been very keen on status. He used the story of guests at a wedding to urge his followers to sit at lowest place on the table, not the highest. There is perhaps a danger that this can be seen as way of getting approval, as the host, very publicly, has to encourage the individuals to a better place. But the most striking teaching is at the last supper, when Jesus, very much in charge of the event and clearly the leader, takes on the role of a servant to wash the feet of his disciples. Here Jesus demonstrates how it is possible to reconcile being a leader with acting a servant to those he had to lead. It is the balance between recognising our worth (with the responsibilities that brings) alongside a recognition of the value of others.