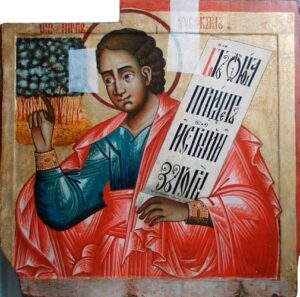 Not, until this afternoon, I don’t think I had read Habakkuk either; in fact if you had asked me if there was a book bearing his name in the Bible, I might have struggled to give an honest answer. He is what is known as a “minor prophet” and the name says it all. It is a short book, buried in the middle of the Old Testament surrounded by other books that rarely get read.

The book was written in response to a great catastrophe that was about, or had just, befallen the Jewish nation; probably the destruction of Jerusalem. But Habakkuk did not just see this as the fall of a city or even a nation; he saw it as the destruction of all of creation, the end of the natural world;

“Though the fig tree does not bud and there are no grapes on the vines, though the olive crop fails and the fields produce no food, though there are no sheep in the pen and no cattle in the stalls”

In spite of this, he had hope:

“yet I will rejoice in the Lord, I will be joyful in God my Saviour. The Sovereign Lord is my strength;  he makes my feet like the feet of a deer, he enables me to tread on the heights.”

Habakkuk had faith, that God would provide the resources for his people to rise again.