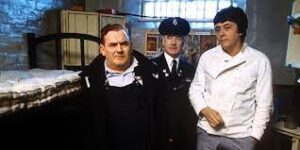 This week, I’ve been on a curate training day which looked at the role of prison chaplains. For me, prison means “Porridge”, the sit-com from the mid 1970s, recently rerun on the TV channel “Yesterday”. It is set in the fictional Slade Prison and stars Ronnie Barker as Norman Stanley Fletcher, “Fletch”, a middle-aged career criminal, a man, who in the words of the opening lines of each episode, accepts prison as an occupational hazard. Barker considered this to be the best series he ever starred in and as a teenager I recall it being one of the highlights of the week (let’s face it, there wasn’t much competition in Highley in the mid 1970s…). Of course, it reflects the language of its day; “gay” had an entirely different meaning and “BAME” had not been invented. Those easily offended by words may find it difficult viewing at times. However, I would respectfully suggest that if that is the case, they are missing the point; I think the series is underlain by morality that is highly Christian.

The comedy works because of the sense of comradeship between all the characters. The gay prisoner and the black prisoner are accepted for who they are by their fellow inmates. The prison officers, even the strict Mr Mackay, are also shown as being part of the same community as the prisoners. And at the centre of the series is the relationship between Fletch and first-time prisoner, Lenny Godber. Fletch becomes a mentor to Godber, helping the young man to survive his incarceration. But Fletch himself is also changed by the relationship; he is prepared to give up his own prospect of early release to stop Godber from imperilling his parole, he forgives the judge who sentenced him and he eventually rejects his previous life of crime.

There is a sense that Porridge is really a story about rebirth; it is what resurrection looks like. The series is not overtly religious; Barker was a humanist and I have no idea about the beliefs of the writers. But if you want to know what it means to be born again and live in the Kingdom of God, even if you call it something else, this series gives you some powerful pointers.