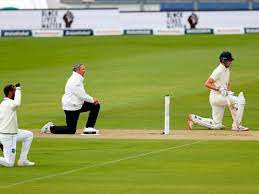 For me it was last summer that it really struck home; watching the international cricketers “taking the knee” before play. This was of course from the “Black lives matter” movement, a gesture that originated in the United States. I had seen it at the protest marches in this country, but seeing it at cricket matches brought home to me how it had captured people’s imagination. Now it occurs at the start of every professional football match in this country and at most games in the Euros. The gesture has not been without controversy but I have to say I find it a useful reminder of our need to stand against acts of injustice, whether deliberate or unintentional. I have to say I find it baffling when teams are booed for the gesture. Symbolic gestures are of course ingrained in the church; perhaps the most familiar is folding hands when praying, something drummed into people of my age at school assemblies. This may have originated as an aid to stop distraction, but it is now recognised as a sign that the person is praying. As with taking the knee, this may or may not be useful. It can be insincere. There is also the potential for embarrassment…. There are photos of myself, taken when I was ordained, where I seem to be sickeningly pious with my hands clasped together. I now cringe when I see them, but they truthfully capture a moment when, for me, it was exactly the right thing to do; the movement spoke more than any words I may or may not have been uttering. This says something important about symbols. Speaking is not the only way of communicating; our movements, kneeling, clasping hands, can be very clear statements about how we feel. We need to be mindful of the effect that they might have on others, just as do with words, but we should not neglect the power of our body language to express our deepest emotions and aspirations.