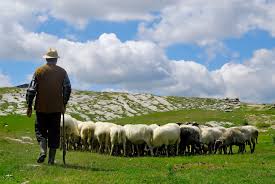 I’ve read that when a shepherd died and came to be buried, a handful of wool would be put alongside him in the coffin. The idea was that, come the last trumpet and the resurrection of the dead, the shepherd would emerge clutching the wool to show that when everybody else had been in church, he had a genuine reason why he was rarely there; he had to be with his sheep, to do his job. I don’t know how true this is, still less am I convinced of the theology behind it, but it is an instructive story.

As a vicar, I am very much aware that one of the things I do on a Sunday is to count the congregation in church. Well, of course, I hope people will attend the services I take and that what I say and do may help them in their faith, wherever they may be on that particular journey. But it is all to easy to become a Sunday-only vicar, or indeed a Sunday-only Christian. A couple of months ago, when all our church buildings were closed, I reproduced a cartoon entitled “where the church is”. It showed a street in a city, with a series of arrows pointing, apparently random at people or at shops, offices or factories. Next to each arrow was that same caption “the church is here”. It made the point that wherever we go, God is present and we so we can find God anywhere and at any time. If I bring anything distinctive to my work as a vicar, it is because I work full time outside the church, as scientist and university lecturer. I don’t wear my clerical collar when I am at work; simply a cross lapel badge to remind myself in times of stress of the faith I try to practice. I take inspiration from a fellow worker-priest, who has spoken of how his computer on his desk at work becomes his altar, as he prays for his work colleagues. But this isn’t something just restricted to the minority of volunteer vicars; the cartoon in the church times was pointing out that it something that all Christians should aspire to. Perhaps as a church we do not do enough to celebrate what people do when they are not in church on a Sunday; we don’t need a clerical collar or a tuft of wool to take our faith out into where we work and live.