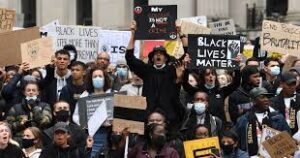 Justice, mercy and the Cross

This week, at last, the news has not been entirely dominated by Covid; instead, it has been events in the USA that have grabbed the attention of the media. George Floyd died whilst being detained by police; an officer has now been charged with his murder. The response has been (at the time of writing), twelve nights of protest. In this country there have also been mass demonstrations, in spite of pleas to follow the current law on mass gatherings to stop the Covid outbreak. These demonstrations have partly been in sympathy with the those protesting in the USA but also in response to racism in this country.

All this raises difficult questions about justice and personal responsibility. These are timeless issues and they are at the heart of the Jewish and Christian scriptures. Time and time again, the Old Testament tells of a God who loves justice and mercy, two qualities which do not always fit easily together. But they come together in the voice from the cross, from the one who rejected power in this world and who instead asked for forgiveness for those who tortured and killed him and who reached out in love to a thief crucified alongside him. The love which God demonstrated through Jesus is not an easy path to follow; it makes hypocrites of all of us who try to base our lives on it. And yet we persist; by individual acts of love, of action for justice, of self-restraint, we see God’s kingdom breaking out on earth.