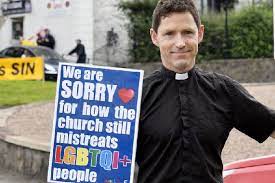 This week, I caught a programme on BBC1 about a community event in Mid-Ulster, in Northern Ireland. It charted the efforts on the gay (LGBTQ+) community to organise a Gay Pride march. Gay Pride marches are something I normally associate with cities, not rural areas such as Mid-Ulster. An extra consideration here is that Mid-Ulster is an area where the Free Presbyterian Church is particularly strong; this regards same-sex relationships as sinful. But the local Church of Ireland minister, the Rev Andrew Rawding, is a firm supporter of gay rights; he has condemned the Church of Ireland for its “homophobic, discriminatory and prejudiced stand” on same-sex marriage. As the Church in England is currently in a major project to examine its own teachings on sexual relationships, I watched the programme with some interest. Some of it was very predictable; interviews with the main organisers of the parade and the Free Presbyterian Church setting out their respective positions. But it did focus on one very interesting dynamic. The Rev Rawding was on the organising committee but some appeared very unhappy that any person from an established church should be helping; they argued that this was inappropriate because of the historic stance of the churches towards the gay community. I think the Rev Rawding agreed to take a back seat, although he did take part in the parade. I struggled with the hostility to the Rev Rawding; it seems that some prefer to judge people by the organisations they belong to rather than what they personally believe. It is convenient to group all people together rather than to see the individual, but in the Gospels, we see Jesus doing the opposite. He reaches out to those who are outside the approved parties, treating them for what they are and not attaching labels. It is hard, it is not something I always do, but it does seem to me to be the way of the Gospel.